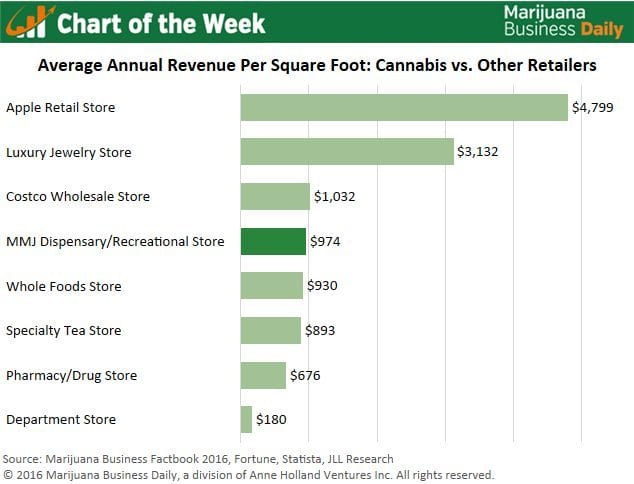 The marijuana industry as a whole has really made a name for itself over the past several years. So much that it can be easily compared to many other large and well-established industries. While young in comparison, the marijuana industry has grown up and grown up quickly. And with only 24 states that have legalized marijuana in some capacity, it is just the beginning.

According to Marijuana Business Daily, the above chart illustrates how important cannabis has become to people and in turn has aided in the development of a retail cannabis industry that can hold its own against some other popular big name retailers.  So how does marijuana stack up against retailers like Apple, Whole Foods and Costco? Two words: very well.

So what does this mean? While the numbers are impressive, it is important to point out that marijuana is about much more than sales and revenue. The industry has become a lifestyle movement and with cannabis at the center of the movement, lives are improving. And the Marijuana movement is so versatile and has become so popular not only because of its many benefits, but also because of the many ways to use it. Personal use, medical use, industrial use and health endorsements all have a role in growing marijuana’s popularity. And as more states vote this coming November, we may see its popularity continue to skyrocket.