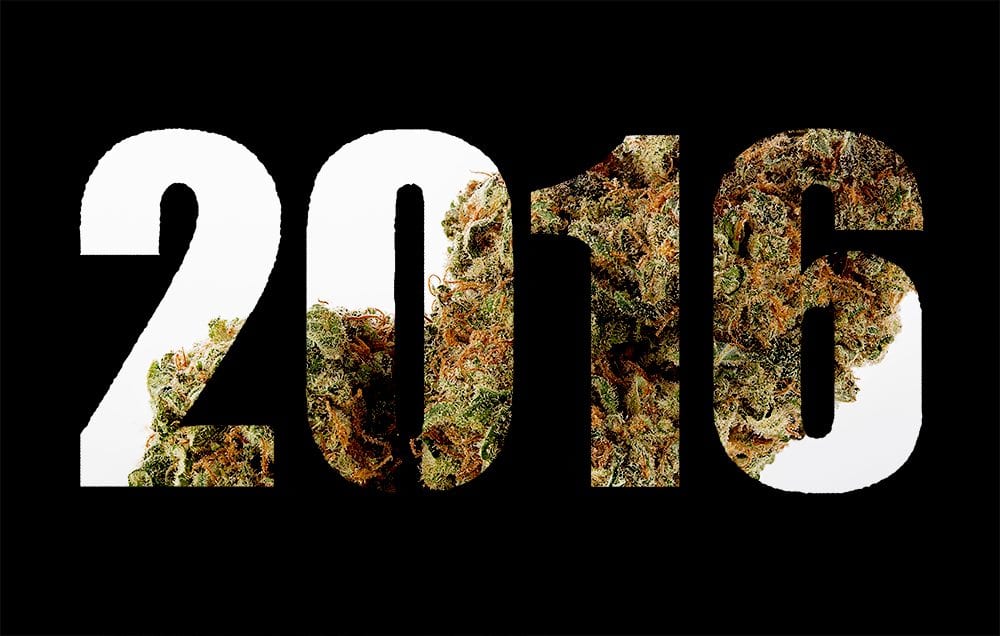 A look back at a year of marijuana. As quick as ever, another year has come and gone. 2016 held lots of big events; world-wide terrorism, the loss of iconic celebrities like Prince and Leonard Cohen, a presidential election that divided a nation, the DEA refusal to reschedule marijuana and more. As much negativity as we saw last year, there were also many bright spots. American teen graduations rates have reached a historic high of 83%, veteran homelessness rates have dropped significantly, giant pandas and manatees were both removed from the endangered species list and American currency will soon feature the faces of Harriet Tubman and Martin Luther King Jr. 2016 was also a great year for the marijuana movement.

California, Maine, Massachusetts and Nevada added their names to the list of legalized recreational marijuana. Now that eight states and the District of Columbia have legalized recreational marijuana, we’re up to about 22% of America’s population with legal access to it. In coming years, more states are expected to follow, especially after a big California win. Arkansas, Florida and North Dakota were also added to the list of states where medical marijuana is available while Montana re-joined the ranks after killing their program earlier in 2016. As many as 60% of Americans now live where access to medical marijuana is legal. While there may be kinks to work out, ultimately these lists continue to grow.

Election results not only provided additional availability of marijuana, but also show what the public really thinks about marijuana. Public opinion towards marijuana acceptance, whether medical or recreational, has clearly grown and the days of seemingly far-fetched marijuana legalization are on the outs. Some surveys indicate that as much as 60 percent of our nation’s adult population are now in favor of legalized marijuana; whether they seek to use it for themselves or not. While still there, hostility towards the marijuana movement has declined as more people begin to understand that relaxing with a joint after a long day isn’t that much different from sipping a beer with friends at the end of the day.

When reflecting on what a year 2016 was, don’t forget to focus on the positivity that took place. Celebrate the year now behind us and move into 2017 knowing that more celebrations await us. Stop by one of our superstore locations and check out our over 150 featured marijuana strains. We are proud to offer our customers more strains than anyone else. With the largest selection of cannabis in the world, there is no place like Oasis Cannabis Superstore. Relax. It’s all here.